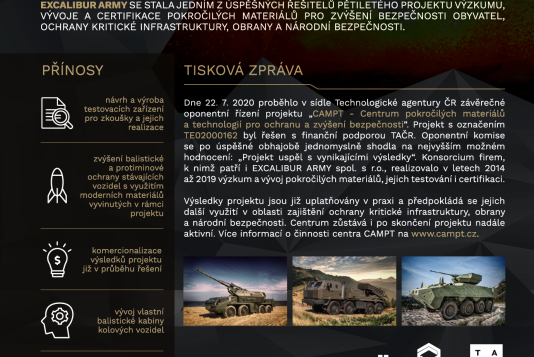 EXCALIBUR ARMY, together with several other defense business partners and national education institutions, led by Research Institute for Building Materials of Technology Agency of the Czech Republic, successfully finished the CAMPT center project.

The CAMPT center is focused on enhancement of security of citizens, protection of critical infrastructure, defense and national security of the Czech Republic.

The project was awarded a top grade by the evaluation comittee and brought a whole set of benefits to all participants. For EXCALIBUR ARMY those most important are:

EXCALIBUR ARMY is proud to have taken part in CAMPT project and is already applying its results in production.

More info about the project to be found on its website www.campt.cz.