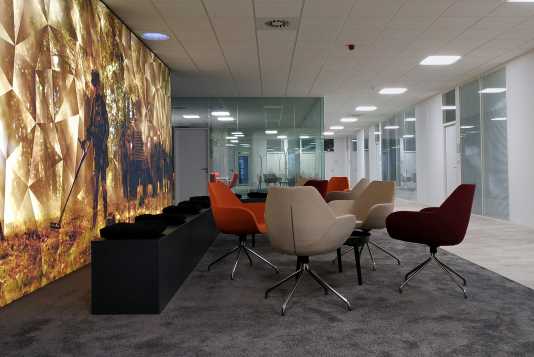 In recent years, Excalibur Army has significantly focused on development and construction projects in the sphere of special and military vehicles for the army land forces, as well as for rescuers, firefighters and other security forces. In the past, the company focused mainly on repair services, modernization of older military equipment and overhaul or production of spare parts. The company will continue to focus on these spheres. However, due to the global technological developments, as well as new business opportunities and customer requirements, Excalibur Army sees the future primarily in the production of new modern land systems, that cannot be manufactured  without its own research and development capacities and new projects. The new development centre is thus another step on the strategic path of transforming the originally repair company into a full-fledged manufacturer of the top special vehicles and weapon systems.

Construction of the development centre began in October, 2019 on the site of the original boiler building in the company's area, and despite the limitations caused by the coronavirus pandemic, work continued as planned. Last June, the construction was completed, after that landscaping was carried out and the interior of the centre building received a new interior. The company started to build a new centre mainly for capacity reasons. The development department was originally located in one of the production facilities, that, due to the limited dimensions and its unsuitable location, did not allow the expansion of the R&D team or the use of modern R&D technologies. The new building of the development centre was built to consider all the requirements for the installation of new R&D technologies as well as the plans for further personnel expansion of the centre. The costs of construction and purchasing and installation of technological equipment of the centre exceeded three tens of millions of Czech crowns. More than a third of the amount the Excalibur Army covered thanks to subsidies from the Operational Program Enterprise and Innovation for Competitiveness.

As of today, 21 developers / designers work in the new centre, the maximum capacity of the centre is 30 specialists. The new premises  provide not only for higher comfort, but also for the  new hardware and software equipment, modern 3D technology (professional 3D printers and 3D scanner with photogrammetry and data converter to various 3D formats suitable for scanning small and large objects), server room with high technology, with sufficient graphics performance for 3D applications and data storage with maximum security. Furthermore, the centre provides modern social facilities, technical rooms with printers, a plotter and reprographic equipment, and  modern meeting rooms. The 3D technologies bring the options  of designers to a higher level, not only in the sphere of ​​research and development, but also in the sphere of ​​modernization, service and support the life cycle of the company's existing products.

During the implementation of the interiors, all employees of the centre were given the opportunity to participate in the final solution of the office layout and its furnishing with furniture and accessories. The designers and developers now especially appreciate the peace of mind at work, the possibility of maximum concentration thanks to the elimination of disturbing stimuli from the outside. Some of the centre's employees have experiences with open-space offices in their previous jobs, which is clearly not suitable for creative development and design work. That is why everyone, without distinction, has a positive perception of the division of space into separate smaller offices, where they have a complete background for their creative work. The designers have recently been  working on eight projects, half of which are research / developmental. Some of the projects have been  supported by the TAČR and the Ministry of Industry and Trade, and  Excalibur Army submitted an application to the Ministry of Industry and Trade with yet another project.

Excalibur Army is a growing and expanding company, and thus it has been looking for new specialists for current and future development and production projects. This year, it plans to hire two to three new development designers. It also wants to expand its team with skilled mechanical engineers interested in automotive and special military vehicles.