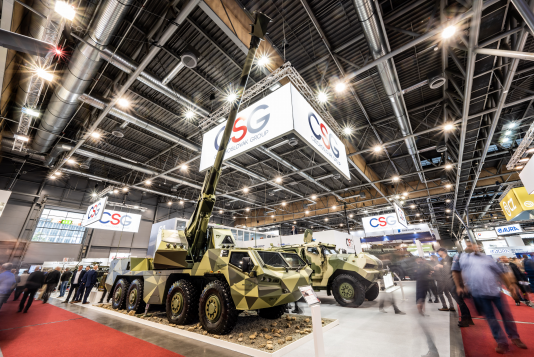 EXCALIBUR ARMY has presented during this year a new self-propelled gun howitzer DITA 155 mm on many defence and security exhibitions.

DITA was first introduced to the world and the general public in the second half of February 2021 at one of the largest exhibition IDEX, held in the United Arab Emirates in Abu Dhabi. The howitzer was presented to many foreign delegations, including the Prince of Abu Dhabi himself, Sheikh Mohammed bin Zayed. DITA was also honored by the visit of the Chief of Staff of the United Arab Emirates Army, Hamad Mohammed Thani Al Rumaithi, who left his signature on the front mask of the vehicle cabin.

The second, this time an European exhibition, where the company presented the vehicle, was the MSPO defence exhibition held in Kielce, Poland, at the beginning of September 2021. Visitors had the opportunity to watch a dynamic demonstration of gun movements, automatic gun aiming and charging cycle. The DITA also included the M4 control panel, which indicates all diagnostics data related to the gun and chassis condition.

During whole year not only DITA was presented, so was other EXCALIBUR ARMY products and we are looking forward to new business opportunities and new exhibtions we will participate!